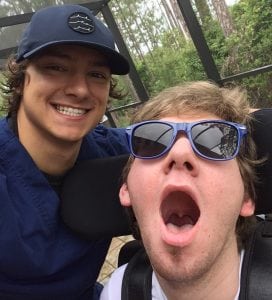 When he finished nursing school, Joseph Lizon knew he wanted to work with pediatric patients. “When I was a kid, I was diagnosed with type 1 diabetes,” Joseph explains. “I decided then that I wanted to help other kids in the same way my nurses helped me.” Joseph assumed his first nursing job would be at a hospital, like most new grads he knew. But his job search didn’t go quite as he thought it would.

When the Aveanna team in Melbourne, Florida reached out to him about their new grad program, Joseph discovered he could care for pediatric patients in their homes instead of in the hospital. And when he started working with his first Aveanna patient, Morgan, Joseph realized this work was exactly what he was looking for.

Joseph enjoys his work with Aveanna because it allows him to truly understand his patient’s needs. Joseph takes pride in knowing not only Morgan’s clinical requirements and routine but also just what to do to make him smile. Morgan’s parents, Robert and Kristen, treasure the care Joseph shows their son. “Joseph and Morgan have formed a bond that reminds us of the one Morgan has with his older brother,” Robert and Kristen share. “To see the way Morgan looks at Nurse Joe warms our hearts.”

Joseph became a nurse because he wanted to care for and connect with pediatric patients who needed him. With Aveanna, he found the perfect way to do just that.