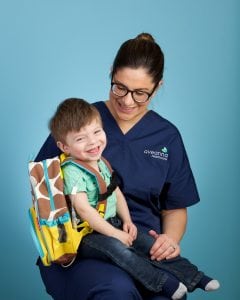 One of the sweetest toddlers on the planet, two-year-old Ashton is such a charmer! He always has a contagious grin on his face and he creates the same on anyone he meets. Born at just 29 weeks gestation, Ashton has been a mighty superhero since the day he arrived. Ashton was welcomed home from the NICU by his parents, grandparents, and four older siblings. His Aveanna care team was soon added to the family, and Ashton has been a light to everyone’s life ever since.

Ashton was diagnosed with dysphagia, feeding difficulties, esophagitis, expressive language disorder, delayed milestones in childhood, muscle weakness, and congenital deformity of the sternocleidomastoid muscle. He uses a variety of Aveanna services to help him reach his health goals and daily needs, including pediatric therapy, medical solutions, and private duty nursing. 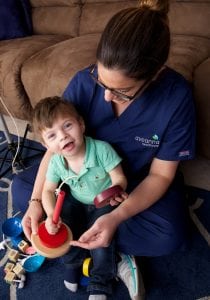 “Ashton has made excellent advancement with speech and feeding,” brags Jessica Stohner, Ashton’s Speech-Language Pathologist. At the start of treatment, Ashton was not able to safely eat or drink anything by mouth. With feeding therapy in conjunction with VitalStim, Ashton is now drinking thickened liquids from a cup and enjoying many different foods by mouth. Although Ashton still uses his G-Tube in order to get enough calories, the amount of independence and the quality of life that he has gained from enjoying family meal times is tremendous. Ashton is working on goals for feeding with independence from the G-tube and improving his language daily.

We are so proud of all Ashton has accomplished in our time working together. Aveanna loves being a part of Ashton’s big family, and having him as our little buddy is the greatest reward.