Finding the Perfect Therapy Team for My Son
Published June 28, 2019 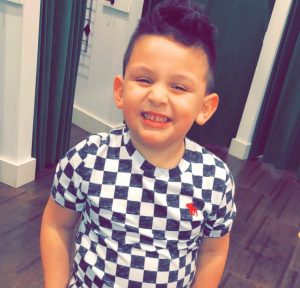 Although my son, Erik, has always been a sweet boy, when he turned three his behavior began to change. I noticed a delay in his speech when he turned three years old, which was a bit odd to us since my older daughter had been verbal by the age of two. This delay in Erik’s speech resulted in his having behavioral issues and feeling frustrated due to his inability to communicate. He would cry and point at things he wanted and had an overall unhappy mood.

It was at this moment that I decided to seek help. I spoke to Erik’s pediatrician, who referred me to Aveanna Healthcare. While I was hesitant, I knew that this was beyond me and, in order to help Erik, I was going to have to seek a team of professionals. Erik began speech therapy with Aveanna in December of 2017. From the beginning, his therapists were patient and loving yet firm with him. I would sit in his therapy sessions and try to absorb as much as I possibly could so that I could in turn help Erik at home.

In addition to his speech issues, Erik also had a problem understanding how to transition from one activity to the next. His therapist made sure to target this issue as well. Eventually, Erik had not only learned how to recognize and say the names of colors but also had a better grasp of transitions. I distinctly remember crying because I was so proud of the progress he had made and so thankful that he had this great team helping him.

When Erik’s first therapist had to leave, he continued his speech therapy with Speech-Language Pathologist Lea. I was nervous because I didn’t know how Erik would react, but Ms. Lea stepped in and I once again knew my son was in good hands. Under Ms. Lea’s instruction, Erik continued his growth; he was not only talking more, but his behavior had also improved and he was even singing.

In October of 2018, Erik’s Aveanna therapists advised that he would benefit from additional therapy – occupational therapy. He began OT with Occupational Therapist Sonali, who has since helped Erik improve his motor skills. Ms. Sonali has been a wonderful therapist and helped Erik immensely. He is now able to hold and use scissors correctly as well as put on his shoes and dress himself.

I and the rest of my family are so impressed with the growth Erik has shown. We are excited to see where all this takes him. He loves going to Aveanna and working with his therapists. This was hands down one of the best decisions I have ever made. My son’s well-being and overall happiness is my top priority, so to see him happy and communicating brings me an immense amount of joy and pride.

Thank you to Aveanna and to all of the therapists who have helped and continue to help my son be the absolute best version of himself. To those parents experiencing these same issues, I would just like to say: Never give up. Know that with the right team of professionals your child will overcome these obstacles.