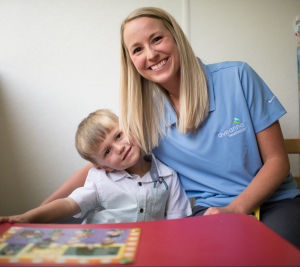 Hudson is a four-year-old social butterfly. He’s been an extrovert since the day he was born. During his first two years of life, which were filled with appointments, tests, and surgeries, Hudson was never afraid when surrounded by doctors and nurses. He just always loved meeting new people. The only problem was that he couldn’t hear or speak to them.

Hudson failed his hearing screenings at birth. His profound hearing loss presented challenges to both Hudson and his parents. Hudson’s mom, Dana, says she felt overwhelmed and worried about what the future might bring for her son but knew that whatever happened, they would face it together as a family.

Hudson wasn’t initially approved for cochlear implants and had to wear hearing aids, which he hated. He had 15 ear infections in one year, and his hearing continued to deteriorate. Then, a little over two years ago, Hudson was finally approved for cochlear implants, and Dana found Aveanna Speech-Language Pathologist Courtney O’Neill. That’s when things began to change for Hudson and his family. 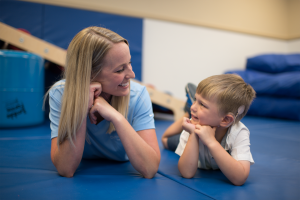 Dana says that meeting Courtney felt like a miracle. According to Dana, Courtney can work magic in just minutes during therapy sessions. She gave Hudson’s family tools and resources to overcome his communication barriers. But, Dana says, the most important thing Courtney and the rest of Hudson’s therapy team gave their family was the confidence that they could do this. The confidence that clear communication with an attainable goal for Hudson. Hudson has gained so many beautiful successes since starting speech therapy. He has learned some basic words in American Sign Language, added hundreds of words to his oral vocabulary, and learned to sing. Best of all, this little people-person has gained the skills he needs to talk to anyone he meets. Now, Hudson will grab a new friend by the hand and lead them off to go explore, talking all the way. He’ll strike up a conversation with everyone in the grocery store line about their purchases and ask them whether or not they are very hungry. Thanks to his Aveanna therapy team and his family’s support, Hudson can connect and communicate just like he’s always wanted to. Hudson has finally found his voice.
Search Articles by Category: