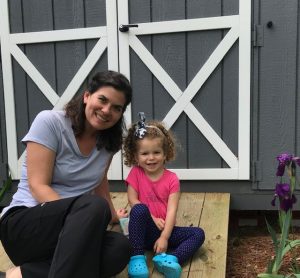 When Margo was diagnosed with profound hearing loss shortly after birth, her parents began researching options for early language development for children who have hearing loss. They read a lot of books, researched articles online, and spoke to young adults who have cochlear implants. They asked these young adults about their experiences and what they would have changed if they could. They all shared with Margo’s parents that, while they were so happy having the cochlear implants, they wished they would have learned American Sign Language (ASL) as children. This led Margo’s parents to decide on a bilingual-bimodal approach to language intervention for their daughter.

Margo and her parents met Speech-Language Pathologist Kristin Karmon, MS, CCC/SLP, when Margo began Early Intervention speech therapy services. Kristin has specialized education in working with deaf and hard of hearing children from Gallaudet University. She uses a bilingual-bimodal approach when working with young children with hearing loss, using ASL from infancy and adding spoken language as children receive cochlear implants or hearing aids. This approach ensures that children have early access to language, supports their use of ASL (which enables them to be a part of the deaf community), and supports their ability to use spoken language with others in their community who communicate verbally. Kristin’s approach was exactly what Margo’s parents had envisioned for their daughter.

Margo’s parents had been signing with her from the first day they found out she was deaf. Kristin was able to come alongside them and support their use of ASL in daily routines, provide research on the benefits of a bilingual-bimodal approach to language intervention, and later support them in Margo’s learning spoken English. When Margo received her cochlear implants at ten months old, Kristin offered strategies to support both ASL and spoken English in her home environment to ensure Margo’s bilingual language development.

Now, Margo is two and a half years old and is communicating well in both languages. She uses four- and five-word spoken expressions to respond to questions, ask for things she wants and needs, and share what is happening in her play. Margo also uses signed expressions when out at deaf community events to engage with those who sign with her. She continues to develop her language skills in both ASL and spoken English. We are so proud of Margo’s progress and the work Kristin has done to support that progress.