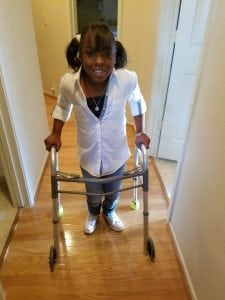 That’s eleven-year-old Kennedy’s motto. She repeats it to her grandmother and mother, Tashia, every morning. “Kennedy puts her leg braces on and is ready to face the world,” Tashia beams. When other kids ask Kennedy about her braces or walker, she simply states, “My legs don’t work like yours do.” When they ask her whether she can do this or do that, she loves to show them that she can. She can walk, she can ride a bike, she can play. She just needs a little extra help.

When Kennedy first began physical therapy with Aveanna PTA Barbara Chebret, she didn’t want anything to do with her sessions. “She used to fire Barb all the time,” Tashia chuckles. “Or she would say, ‘I’m not doing my therapy today, Ms. Barb. How about that?’”

Eventually, Barb won her over. “I started liking therapy when I noticed how it helped me walk,” Kennedy admits. Kennedy’s physical therapy sessions brought new possibilities to her life. When she realized that she could do so much more with Barb by her side, Kennedy developed new resolve. 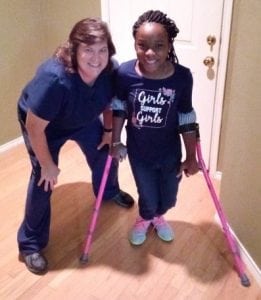 “With her therapy and recent surgery,” Tashia says, “Kennedy’s attitude and self-esteem have changed. She has a new-found independence and self-confidence. Now, she looks forward to therapy. She loves that she can take steps by herself. To see her celebrate after she walks on her own melts my heart.”

“I love Ms. Barb,” Kennedy declares. Tashia agrees, “Barb is the best thing that ever happened to us. Kennedy loves her. I love her. Our whole family loves her. We wouldn’t be where we are today without Barb.”

Barb counters that Kennedy’s progress in therapy stems from her family’s support and her own determination. “Kennedy sets goals for herself in therapy,” Barb points out. “And she accomplishes them. One major goal she set for herself last year was using her walker at school instead of her wheelchair. And she did it! She is amazing. When I’m feeling down, Kennedy picks me up just by being herself and showing me how hard she works.” 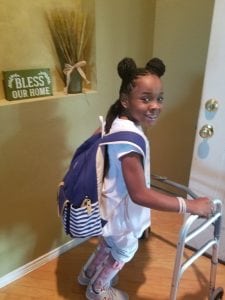 “When I see my baby now,” Tashia says, “I can’t believe how strong she is. She does it all. This girl has no limitations. Sometimes it scares me. But she tells me she’ll be fine. So I don’t worry – I know as long as we have Barb, everything will be fine.”

Kennedy claims Ms. Barb is helping her walk. Barb explains that it’s Kennedy’s own strong will. Tashia says it’s both. “Kennedy’s determination and Barb’s commitment are why Kennedy is where she is today,” Tashia asserts. That’s why Kennedy’s motto is “I can and I will.” Kennedy “can” because of her therapy. She “will” because of her resolve and perseverance. That powerful combination has brought Kennedy so far. And it’s what will see her through any other challenges she may face.