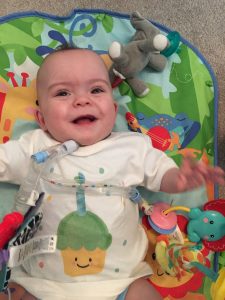 Lawson’s first year of life has been a difficult one. Born at 26 weeks in March of 2017, Lawson was in the hospital for 300 days before he came home. He was born one pound and eleven ounces, with a congenital heart disease and respiratory issues. He waited in the hospital four months for a full heart repair and five more after that before he finally got to come home. That’s when Lawson met Aveanna.

Lawson’s parents, Stacy and Eric, have been amazed at the difference between their son in the hospital and their son at home. “Lawson is always happy now that he’s home,” Stacy says. “Every week we introduce something new and every week he learns it.” Stacy says that Lawson could never have grown this way in the hospital, where the only options were lying in bed or sitting in a chair. 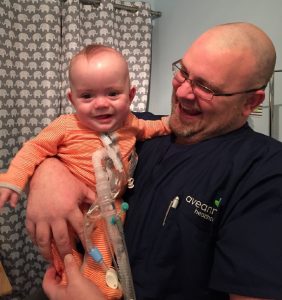 "We are finally getting somewhere," Stacy says. “In the hospital, it felt like we were running around in circles.” Now, Lawson is sitting up on his own, gaining weight, sleeping well, and smiling all the time.

The very first night Lawson spent in his own home, PSA nurse Brent was there to care for him. And he has been there four nights a week every week since then. “I could tell Lawson felt comfortable with Brent right away,” Stacy remembers. “Now, I just have to say Brent’s name and Lawson’s eyebrows perk up!” Eric and Stacy treasure the peace of mind their nurses give them. “Being able to trust your child with another person and know that he is getting the care he needs even when you are gone is an amazing feeling.” 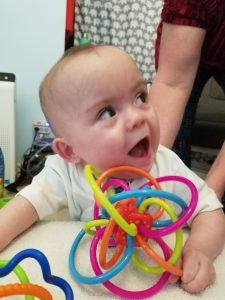 Stacy says one of the most important lessons she and Eric have learned over the past year is to just take everything one day at a time. But she can’t help having hopes for the next year. She hopes Lawson will start walking. She hopes he will start eating by mouth instead of by g-tube. She hopes he will get his trach out and learn to talk. She mainly just hopes he will try new things and be a normal kid. Stacy and Eric can’t wait to see where this next year will take Lawson, and neither can we.