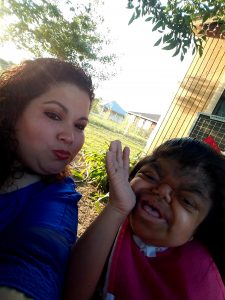 When Sherry gave birth to her third daughter, Dominique, the nurses wouldn’t let her see her baby for what seemed like forever. She overheard doctors talking about trachs and vents and surgeries. She didn’t know what it all meant. In a moment that was supposed to be full of joy, Sherry began to feel worry and fear.

Dominique was born with Beare-Stevenson cutis gyrate syndrome, a condition with only 20 known cases in the world. Dominique is the only person in her home state of Texas with the syndrome. When Dominique was born, her nurses were afraid of how Sherry would react to her daughter’s differences. “They were afraid I would turn her away,” Sherry remembers. “But I could never reject my daughter. It’s hard, but we just pray and take it day by day.”

Sherry has to take it day by day in a way that few parents do. She is constantly facing the unknown. She joined a Facebook group for parents of children with Beare-Stevenson, but Dominique is the oldest child in the group. Other parents reach out to Sherry to ask her for advice. They ask how she got Dominique to crawl and to walk. Sherry answers, “I just follow her lead. It’s all her.”

Sherry may think that it’s all Dominique, but she does so much more than she knows. Sherry celebrates Dominique’s differences, gives her the space to grow, and encourages her to do more and be stronger.

Sherry constantly praises her daughter’s individuality. She has to do this relentlessly because there are always others ready to tear Dominique down. “We battle her sickness,” Sherry relates, “but we also battle how other people treat her. That’s one of the most difficult parts of her sickness. I wish parents would teach their kids that being different is okay. Disability doesn’t mean she can’t be somebody.”

It’s not just other kids that Sherry has to keep from limiting her daughter. She recalls a doctor who warned her that Dominique would never be “normal.” “You’re right,” Sherry countered. “She’s extraordinary. She is more compassionate, more loving. She’s not like you and me, but that’s not a bad thing!”

While she celebrates all that her daughter is, Sherry also gives Dominique opportunities to challenge herself. “It’s hard not to keep her in a bubble,” Sherry admits. “She wants to do everything. She doesn’t have limits. If she sees her sister do a flip, she tries to flip. We have a pool, and she always wants to jump in. Sometimes it’s scary, but I have to let her try new things. It’s hard, but I’m always there watching over her.”

Dominique is eight years old now. She goes to school, communicates with sign language, and is learning to use a communication device so that she can talk to people who don’t know sign language. She is always active, always swimming and dancing. She is going to try out for cheer at her school this year. “She learns quickly and doesn’t know limits,” Sherry smiles. “I treat her like a normal kid. That’s why she’s so strong.”

Sherry doesn’t know what the next eight years, or even the next year, will hold. But she knows that her daughter is someone special, someone who deserves every opportunity and every ounce of love she can give. So Sherry showers Dominique with the passionate love, acceptance, and protection that only a mother can give.

Sherry still worries about her daughter the way she did the day Dominique was born. She also loves her just as freely and fiercely as she did that first day. Sherry and Dominique learn together every step of the way. “She has shown me a different world I didn’t know existed,” Sherry shares. “She has shown me that we can celebrate being born different. Have you heard the saying ‘one in a million’? We are very proud to say we have our one in a million at home.”