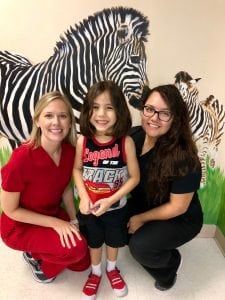 The first day of school is an exciting time for any student. But for our patient Nicholas, it was a particularly special milestone this August.

Nicholas started coming to the Aveanna therapy clinic in Houston, Texas three years ago. At the time, he had limited verbal speech. He couldn’t pick up or hold crayons, pencils, or cutlery. He struggled to sit still for more than five minutes at a time. Going to school wasn’t even a remote possibility then. But when Nick began occupational and speech therapy at the clinic, he improved rapidly.

“Everything just started going up and up and up,” Nick’s mom, Cassandra, recalls. “I always knew he would get better. I knew my son was capable of anything. But I never imagined it would happen this soon and that he would learn so much so quickly.”

Nick’s time at the clinic has helped him prepare for school in many different ways. His speech therapy has enabled him to verbalize his thoughts and needs. His occupational therapy has enabled him to feed himself and write his name. And the clinic’s unique environment, which kept Nick surrounded by peers and therapists in a way that home therapy couldn’t, has greatly improved his social skills.

Nick’s time at the clinic, with Occupational Therapist Jenna Niesner and Speech-Language Pathologist Rubi Deleon, has made it possible for him to not only go to school but to truly thrive there. “I’m so excited for Nicholas to go to school this fall,” Cassandra shares. “I know that he’s capable of learning so much and achieving so much. He’s already shown us he can! My goal for him in school is just that he keeps doing as wonderfully as he has been doing in therapy.”