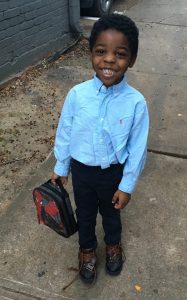 Presley started therapy services with Aveanna in December of 2017. He was a bright, happy, and intelligent three-year-old. But Presley also had a severe fluency disorder and was beginning to show anxiety about the way he spoke.

When Aveanna Speech-Language Pathologist Jessica started working with Presley, she gave Patrycia, Presley’s mom, a crash course in fluency disorders. Jessica was nervous that Patrycia would be overwhelmed with all the information and the work it would take to improve Presley’s speech. But Patrycia wasn’t intimidated at all. She was ready to get to work and help her son, no matter what it took.

Every day that Presley did not have a session with Jessica, Patrycia made sure to sit down with him and have a mini session of their own, using the tools Jessica had taught her. When it came time for Presley to go to school for the first time, Patrycia was also able to successfully advocate for her son to get the modifications and services he needed, thanks to the education she had received from Jessica. Now, less than a year and a half after starting therapy, Presley has met all of his goals and demonstrates a fluency rate similar to someone without a fluency disorder. He is on track to be discharged from our services at the end of this month – which just so happens to be Better Speech and Hearing Month. Presley’s therapy services improved the way he communicates, and that is an incredible thing. But that’s not all speech therapy did for Presley. Knowledge from speech therapy empowered Presley’s mom to advocate more effectively for her son. Therapy also helped Presley gain confidence and overcome anxiety about his speech struggles. These are just a few of the amazing things that speech therapy can accomplish!
Search Articles by Category: