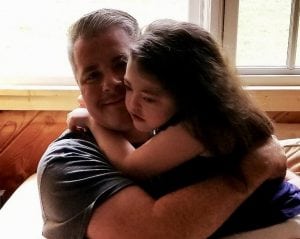 Reagan started having seizures when she was only four months old. She has a form of intractable epilepsy that was never fully diagnosed. For years, Reagan suffered from hundreds of seizures each day and was in the hospital six or more times every year. Quiet moments together, like the one Ron and Reagan shared on the beach last year, weren’t possible then.

While Reagan was fighting for her life during those years, Ron was by her side every step of the way. “I have to be her advocate,” Ron explains. “I have to be her voice. I have to decipher what she’s saying and know what she needs. It can be so hard. It’s like trying to put together a puzzle that never ends.”

When Reagan’s treatments weren’t controlling her seizures, Ron looked into other medications and diets and eventually got her into a clinical trial. And when his insurance company denied Reagan private duty nursing services, Ron worked nonstop for six months to get his daughter the care she needed.

That victory changed everything. Since Reagan began nursing services two years ago, she’s been in the hospital only three times. Her seizures have decreased, and her quality of life has increased dramatically. But Reagan’s nurses have done more than improve her health. Because of the nurses, Ron is finally able to spend time with Reagan as father and daughter instead of caregiver and patient.

“It was overwhelming and unmanageable before our nurses came,” Ron admits. “I had to learn to share the load with them. I had to learn when to step back and have faith in them. Now, I don’t have to be deciphering on my own all the time. Now, we’re working on the puzzle together.”

The nurse who went with Reagan and her family to the beach last year made Ron’s favorite memory possible. And every day, the nurses help Ron and Reagan make more memories just like it. “Now that we have nurses, I can sit on the couch with Reagan and just hold her and watch a movie without having to worry about machines or medications or anything else,” Ron says. “Because we have nurses, I get to feel like a dad again.”