The Joys and Fears of Parenting a Medically Fragile Child
Published Jan. 25, 2019 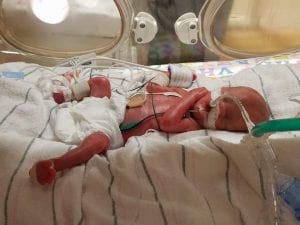 I still remember the day that I found out I was pregnant with our little Kizzie Jane. I was overwhelmed with joy and fear. I was so excited to be pregnant again after a miscarriage. But I was scared as well because of the issues I’d had with previous pregnancies.

At first, my pregnancy was very normal. I didn’t even have morning sickness. But when I was at 22 weeks, my water broke. I was put on bed rest, first at home and then in the hospital. After about three weeks of bed rest, Kizzie’s cord prolapsed, and I was rushed to the OR for an emergency cesarean section.

After the C-section, my husband, Brandon, and I waited for news about Kizzie. Finally, the doctor came in to update us. He told us that Kizzie was alive and in the NICU. Again, we felt joy and fear. Kizzie was alive, but she would be in the NICU for nobody knew how long. I was happy to be back home with the rest of my kids after weeks in the hospital. But I was devastated that Kizzie had to stay.

Kizzie went through so much in the NICU. We were initially told that she had about a 30% chance of survival. Every day, that percentage increased. But for Kizzie, every day was a fight and each tomorrow was a maybe. Kizzie coded several times in the NICU and contracted MRSA and a blood infection. 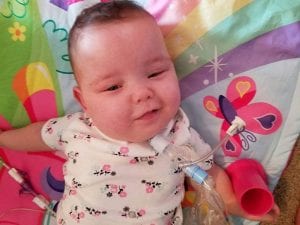 Finally, Kizzie started to stable out. But then the doctor told us she would need a tracheostomy before she could come home. Again – joy and fear. We wanted her at home, of course, but we fought the idea of a trach at first. We were so scared of the unknown. Eventually, we decided that we would do whatever it took to bring her home.

Kizzie got her trach and g-tube on the same day. When I went to her room after the surgery, all my fear disappeared. I could finally see my little girl’s face without her being intubated and without all of the tape. Within a week, Kizzie started smiling for the first time. Brandon and I knew that we had made the right decision.

As Kizzie improved, she moved from the NICU to the PICU so that Brandon and I could start our training to take her home. We had a long list of things to learn. To be honest, we both questioned a few times whether we could do it. You would be surprised what you can do for your child when you have no other choice.

Finally, we finished all of our training and brought Kizzie home. I don’t think I slept more than ten hours that first week she was home. Luckily, we were approved for a nurse to be with Kizzie every day for ten hours, and I was able to get some sleep. 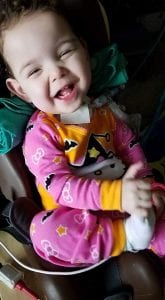 At first, I was a bit nervous about having a nurse in our house. But from day one, I was so thankful for the nurses’ help. We have had the most amazing experiences with the nurses who have worked with Kizzie. And we find ourselves getting close to them too. They really have become a part of our family. They help so much with doctor appointments and organizing. Not to mention, I think I’ve cried on the nurses’ shoulders a few times.

Since coming home, Kizzie has had times when she would start to improve and then take a few steps backward. We would get discouraged. We eventually learned to avoid setting ourselves up for disappointment by always remaining realistic.

Last year, Kizzie slowly started to improve. We were able to get her off the ventilator during the day. Lately, she is progressing even faster. She passed her sleep study, so the ventilator went away finally. Now, we are in the process of dilating her airway so that we can start the decannulation process.

It will be a while until Kizzie will be completely caught up for her age. But we have definitely gotten used to this new norm. And she is improving more and more each day. Little by little, our lives are filling with joy while the fears disappear.