Rémi's Occupational Therapy Journey: With Us Every Step of the Way
Published April 17, 2020 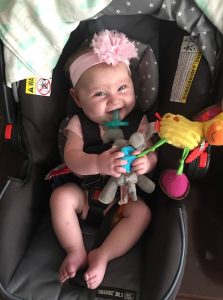 Rémi was born a twin on January 23rd, 2017 weighing 5 pounds, 15 ounces. She was diagnosed in utero at 23 weeks with Hypoplastic Left Heart Syndrome (HLHS). She underwent her first open heart surgery at just ten days old, followed by a quick discharge from the NICU thirteen days post-surgery (just three days after her sister, Scarlett). We were so blessed to have our sweet babies home, both little fighters. Rémi thrived at home. She loved her milk, silly songs, and napping!
At six months old, Rémi was scheduled for a heart catheterization to prepare for her second open heart surgery. Upon induction, she coded and arrested for 37 minutes. Just before the doctors were to put her on ECMO (a heart/lung bypass machine), her 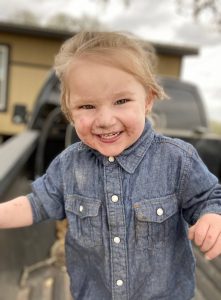 strong heart decided to beat on its own. She was in the hospital for a little over three weeks recovering. At this time, we were focused on her healing. Several weeks later, at almost eight months old, she was scheduled for another heart catheterization to prepare for the second surgery. She came through both spectacularly, only staying in the hospital for a couple days after her surgery. Once Rémi got home, we noticed a significant weakness in her right leg. She had difficulty extending it fully. Luckily, we had our wonderful occupational and physical therapists. They have been with us since Rémi was just a few months old. From working on helping Rémi tolerate tummy time, to equal use of both sides of her body, accepting different textures and touches on her hands and feet, sitting unsupported, pulling to stand, and eventually walking small distances independently – our Aveanna therapists have been with us every step of the way. Now, Rémi is a healthy, happy, sassy, three-year-old little girl with a love of dancing, playing, and hugs!
Search Articles by Category: